About Suit Yourself Solitaire 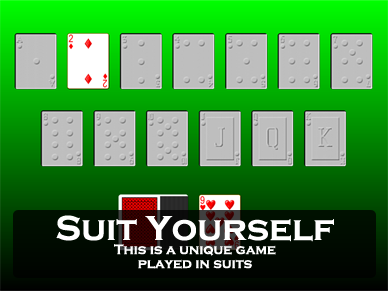 Screen shot of the game Suit Yourself from Pretty Good Solitaire.

Suit Yourself is a unique easy one deck game.

The remaining piles are then to be started with the same suit as this first card. So in game #1, all the other piles will be started with Spades. Once a Spade is moved to its proper numbered pile, it is built in alternate color until each pile contains all four cards of that rank.

The game is won when all of the cards are moved to the 13 foundation piles. There is only one redeal.

The game begins by going through the stock looking for cards of the same suit as the first card, in game #1, this is Spades. All Spades are moved out as they come up to the foundations, then you begin looking for alternate color builds on those cards. The game can be won most times.


Variations of Suit Yourself