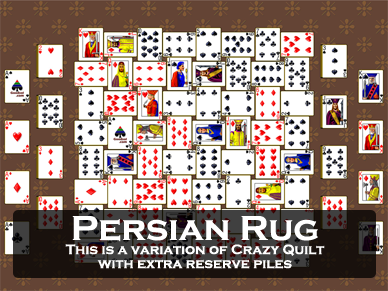 Persian Rug is a variation of the game Crazy Quilt.

There are also eight reserve piles, four on each side next to the foundations. At the start of the game four cards are dealt face up to each reserve pile. Only the top card of each pile is available for play. The reserve piles can be built on either up or down by suit.

Also at the start of the game 64 cards are dealt out in an 8x8 square tableau, with every other card rotated 90 degrees.

In the tableau, only cards which have a short side not blocked by another card are available. In the initial deal, 16 of the 28 cards on the outside edge are available. You play by removing available cards from this tableau and playing them to the foundations or reserves. As cards are removed, interior cards will become available.

The difference between Persian Rug and Crazy Quilt is that instead of having a stock and waste piles, all of the other cards not in the tableau are dealt out to the reserves. Instead of just having one waste pile to build up or down in suit on, you can build on all eight reserve piles. This gives much more opportunity for play.

The key to winning is to build useful sequences on the reserves that you can then move to foundations, and to get to buried cards in the reserves and in the 64 card tableau. 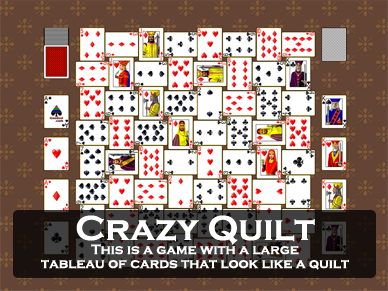 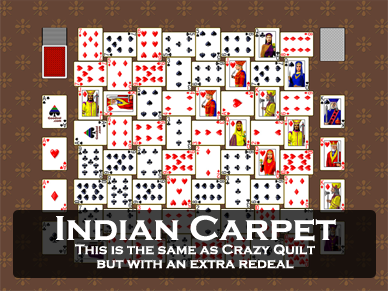