Arrange four rows of cards in this addicting game 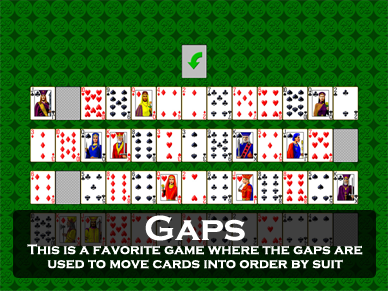 Click on the screen shot of the game Gaps from Pretty Good Solitaire to download the 30 day free trial version.

Gaps, which is also known as Montana, is a very popular and unusual solitaire game. It is played with all 52 cards of one deck fully visible in 4 rows of 13 cards.

My version of Gaps in Pretty Good Solitaire allows you to play offline, full screen, with complete undo and my unique right click quick move. It's the best way to play solitaire!

How to Play Gaps Solitaire

At the beginning of the game the 52 cards are dealt to these 4 rows of 13 cards. After the deal, the 4 aces are removed from wher ever they are. This creates 4 spaces, or gaps. Play then begins.

The object is to arrange each of the 4 rows into sequences from Two to King of a suit. If you can do this, the game is won.

The difficulty lies in the fact that you cannot put cards in a space to the right of a King. Eventually, it is likely that all of the spaces with be to the right of Kings. When that happens, you can gather up all the cards that are not properly placed (that is, all the cards that are not yet in a sequence from Two up in suit, starting from the left end of a row), shuffle them, and lay them back into the vacant spaces. You can leave a space between the last remaining card in the row and the first card dealt back, or for added difficulty, shuffle the Aces in with the other cards and have the spaces appear randomly again where ever the Aces fall. Most sources allow two such redeals, but some say only 1 deal is allowed. If you allow unlimited redeals, you will eventually win the game, but you can consider it a challenge to see how few redeals it takes.

There are several variations of Gaps. In Spaces and Aces, the Aces are not removed, and instead of Twos placed at the beginning of each row, the Aces are placed there. The leftmost spot in each row begins the game empty, and there are actually 4 rows of 14 spaces. Free Parking is like Gaps, but in addition to being able to play a card one rank higher in suit than the card to the left of the space, you can play a card one rank in suit lower than the card to the right of the space. Since this makes the game easier, only one shuffle is allowed. 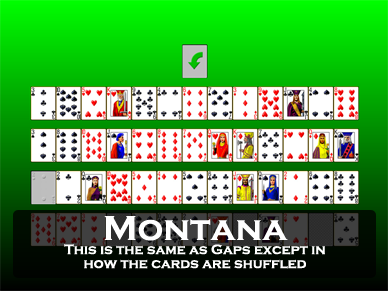 Includes Gaps and 1000 Other Solitaire Games