About Demons and Thieves Solitaire 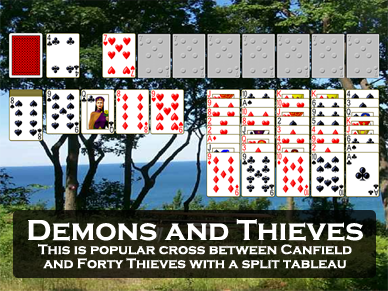 Screen shot of the game Demons and Thieves from Pretty Good Solitaire.

At the start of the game, one card is dealt out (for example, the Four of Hearts). This card is the foundation base card and starts the first of 8 foundation piles. The other 7 cards of the same rank as this card will start the remaining piles as they become available (for example, all the other Fours). These piles are built up in suit, wrapping from King back to Ace as necessary, until all the cards are moved up to the foundation piles and the game is won.

Next, 13 cards are dealt to a reserve pile, with only the top card visible. This top card will be available for play. Next to this reserve, 4 more cards are dealt out one each to 4 piles, starting the left side of the tableau. This piles are built down by alternate color, as in Canfield. Groups of cards in descending sequence of alternate color can be moved together, and empty spaces can be filled by any card.

Finally, 40 more cards are dealt out 8 cards each to 5 more piles, forming the right side of the tableau. Here the piles are build down by suit, and groups of cards in descending sequence down by suit can be moved together. Again, spaces can be filled by any card or group of cards.

The remainder of the cards form the stock, which is turned over one card at a time to a waste pile. The top card of the waste pile is available for play. When the stock is empty, there are 2 redeals.

An interesting aspect of play in Demons and Thieves is that you can play cards in between the two sides of the tableau. If you have a group of cards in sequence of alternate color on the left side, you can move that group onto a card on the right side, if the top card of the sequence is one rank less and the same suit. But if you do, you won't be able to pick that group of cards up again to move it again - because on the right side, you can only move a group that is in suit and the group you just played was in alternate color. Groups can also move from the right side to the left side, but the same restrictions apply, only reversed. In order to win the game, you will probably need to make some moves like this, even if they block you temporarily.

Demons and Thieves can be won every time with good play. Because of this it is more challenging to play without any redeals (only one time through the stock). This form of the game is called Demonthief. Perhaps because you can always win it, but it is still a challenging and interesting game, Demons and Thieves is one of the most played solitaire games (see the most played games list).


Rules to Demons and Thieves Solitaire


Variations of Demons and Thieves 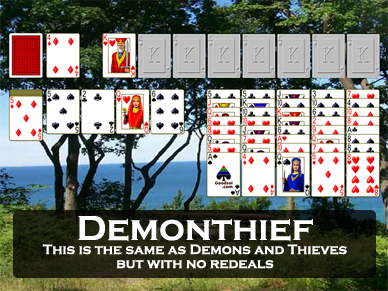 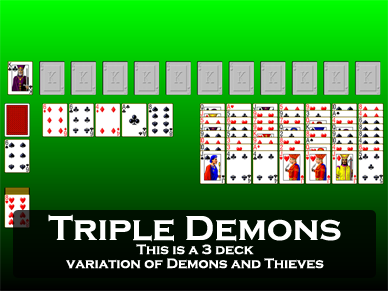 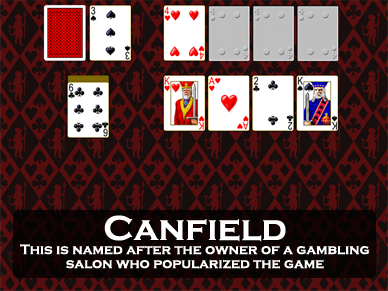 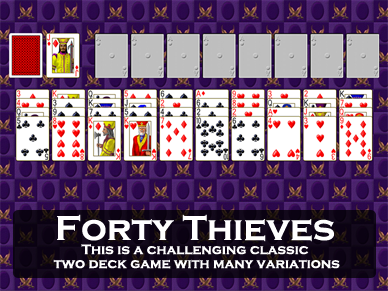