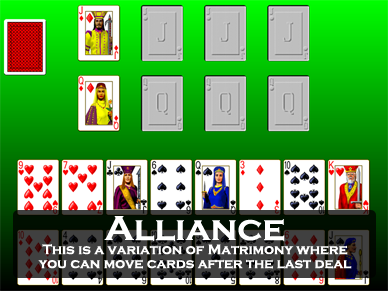 Screen shot of the game Alliance from Pretty Good Solitaire.

Alliance is a two deck game. It is a variation of the game Matrimony. Matrimony is a very difficult game to win, but Alliance changes some rules towards the end of the game to give the player a fighting chance.

The game is won when all of the cards are built to the foundations.

16 cards are dealt out one each to 16 tableau piles. The remaining cards form a stock.

Once the stock is empty and there are no more possible moves to the foundations, the next stage of the game begins. Clicking on the empty stock will do a redeal of the tableau piles.

Here is how the redeals are done: The cards in the last pile of the last row are picked up and turned over. The top card (which was the bottom card before the pile was turned over) is dealt to the pile where the cards were taken, the remainder are dealt to the first pile in the first row and across until the cards run out. Then make any moves to the foundations.

Alliance is one of the 850 games in Pretty Good Solitaire. 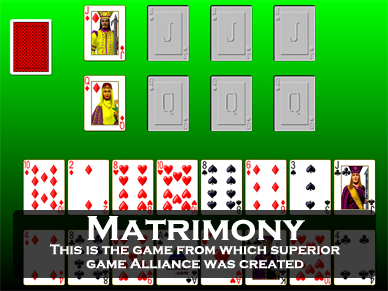