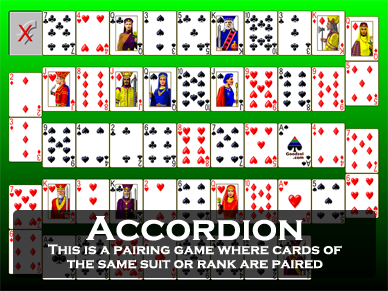 Click on the screen shot of the game Accordion from Pretty Good Solitaire to download the 30 day free trial version.

Accordion is a simple solitaire game of a unusual type. It could best be referred to as a "line game", since the cards are all played in one line.

My version of Accordion in Pretty Good Solitaire allows you to play offline, full screen, with complete undo and my unique right click quick move. It's the best way to play solitaire!

How to Play Accordion Solitaire

At the beginning of the game, all of the cards form a stock and the top card is turned over to begin play. Cards are dealt from the stock one by one and placed in a line or row.

Any card may be moved onto the card immediate previous to it or onto the card 3 cards previous to it if the cards are of the same suit or rank. For example, if you play game #1 of Accordion in Pretty Good Solitaire, the first card dealt in the Queen of Spades. The next card is the King of Clubs. The third card is the Four of Clubs. Since the King and Four are of the same suit, you can drop the Four onto the King.

The next cards are the Jack of Spades, Five of Clubs, Jack and Seven of Diamonds. None of these cards can played on any previous card because none are of the same suit or rank of the card previous or of the card 3 cards previous. The next card is the Two of Diamonds, which can be played on the Seven.

We could keep going, but let's click on the restart button and start again. Deal out the Queen, King, Four, and Jack again. While we could play the Four on the King again, note that we can also play the Jack onto the Queen, since they are the same suit and the Queen is 3 cards previous to the Jack. This illustrates that there are always choices you can make in this game. You don't have to make the first move that you see.

In fact, you can deal out the entire deck before making a move. Note that in Pretty Good Solitaire, when cards reach the end of the screen the cards will go down to the next row in serpentine fashion. Make sure you have a recent version of Pretty Good Solitaire, at least version 12, when doing this, as older versions didn't allow for the entire deck to be played out.

It turns out that Accordion is a very hard game to win if you play it one card at a time, but if you play out the entire deck first and play from the end, the game can actually be won nearly every time, although it may not be particularly easy to do so. 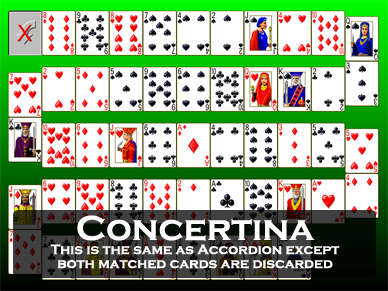 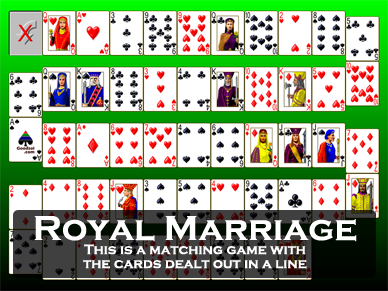 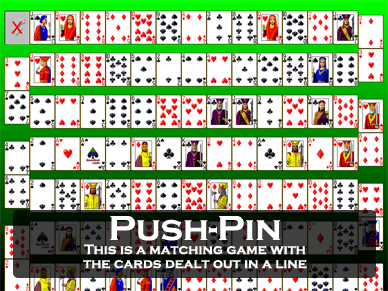 Includes Accordion and 1000 Other Solitaire Games